The Space In-Between: The Value of Interpretation and Interaction for the Next Generation Internet 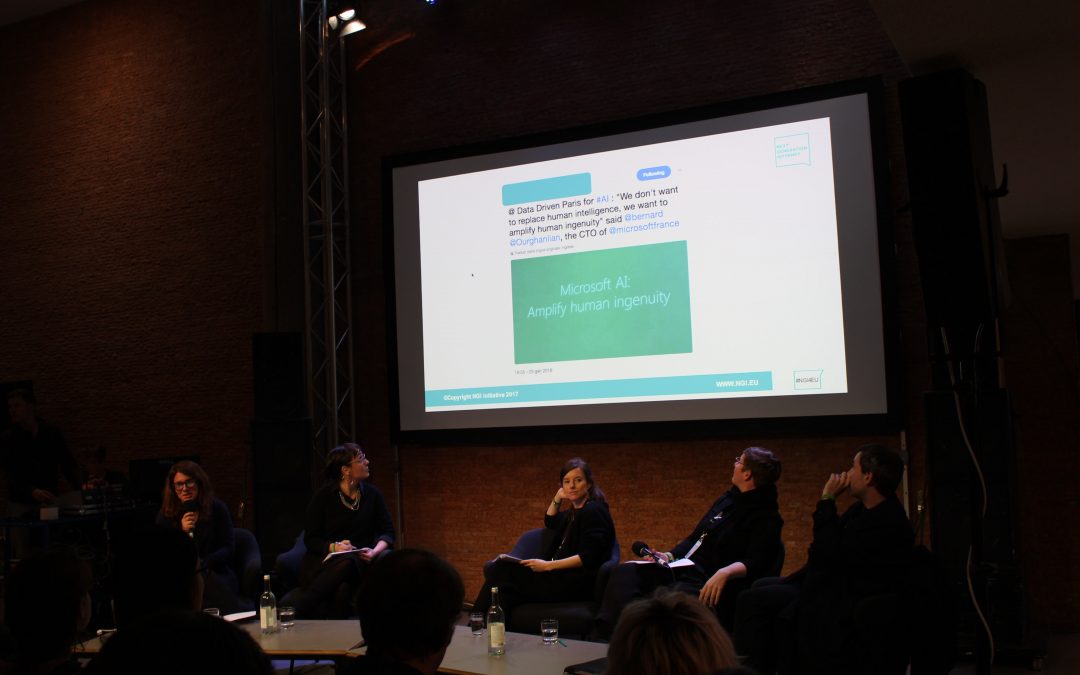 The NGI salon The space in-between: The Value of Interpretation and Interaction for the Next Generation Internet took place on the 2nd February 2018 at transmediale, the renewed digital culture conference. It was the first to engage explicitly with the notion of a “human” Internet by challenging technology determinism. The intervenants were Beatrice Fazi, Uta Meier-Hahn, Ben Vickers, Jeanne Charlotte Vogt. Marta Arniani moderated.

The space in-between is a working concept, a tool for reflecting about the interstices that escape the understanding of the world as lay out by networks. Unquantifiable, made of relationships, unplannable, dirty, disregardful of authority. The spaces in-between are life at its full beautiful uncertainty. When thinking about the Next Generation Internet – indeed about a desirable evolution of the largest worldwide infrastructure so vital for economy, life, the environment – contingency and relations can’t be left behind. They invite to go beyond the strict logic of transaction and fluxes of information across network nodes.  Ultimately, to populate with meaning the notion of a “human” Internet.

The session organised at transmediale on the 2nd February 2018 conveyed a diverse group of researchers and practitioners to discuss about these interstices and make a first set of proposals for envisioning an Internet more diverse.

Following the festival topic ‘Face value’, the objective was to engage NGI beyond the face value of data and networks. It was highlighted how the Internet worldwide infrastructure relies on a community of developers and network engineers who in the era of smart contracts manage the Internet mainly through informal agreements. Two main concerns were brought to the attention: the generational change which will soon be a problem, as programmers now focus on the application layer and successors are missing; the other face of this duality, the lack of communication between the infrastructure layer and the application one, which developers, especially in the IoT space, to carelessly endanger the underlying functioning of the underlying network. From the human side of the infrastructure the conversation moved to contingency in computation, to think of the Internet beyond the technocultural paradigm, or the instrumental perspective. Indeed, the history of computation and logic shows that computing might not always fit with the instrumental and representational purposes that we have assigned to it. In what is prospected as a likely scenario of quasi-universal automation, and with the online world already today populated by semi-autonomous artificial cognitive agents, understanding what the computational is and reconsidering contingency within it can lead to developments more respectful of the immeasurable aspects  of the mind and the self, as well as those of culture and society. It was discussed that we find ourselves in a time where the big utopias for the good that media do to humanity tend to fail – not because they don’t have an impact but because they get consumed by a market and structure they are originally aiming to deconstruct and subvert. It is thus utterly important to distribute means for interpretation of our digital world by the experience of real and powerful human interaction, and to operate in the realm of education to empower people and lead them to take ownership on – and not being owned by – technology. Finally, extremely technocentric scenarios were presented as a condition to think of the limits of current trends: which elements of contingency do we want to preserve from the current blockchain fever? What is the space for social investment of tacking care and responsibility beyond compulsive identification on social media?