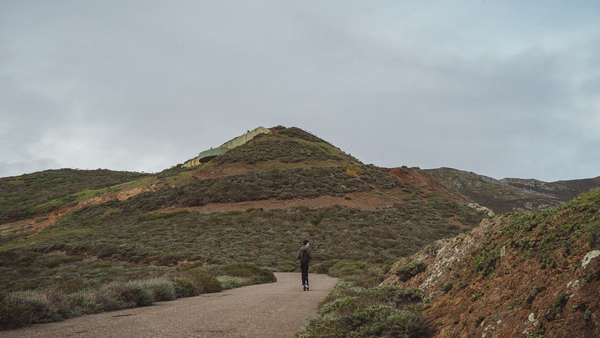 What are your feelings with presence and traceability? I am not talking about mere privacy matters, but a sense of agency, self-awareness, liberty. Disappearing is becoming a fine art, an act of freedom. In our Millennials workshops, it keeps coming up. In order to feel good, people would go to where nobody knows them, unplug, do some screen detox. It implies that so far, the most healthy relationship with technology we can think of is a parsimonious one (which opens up a land of opportunities for developing less overwhelming tech).
Creative experiments are always a liberating resort. Like this one, Riding into oblivion: driving an electric scooter until its batteries die as a means of escaping society. 🛴😃
Even Silicon Valley parents wouldn’t feed their kids with a digital diet: tech-free schools are booming. A pop version of ancient Stoicism is a thing there. Besides the anecdotes, these are families with a certain social and economic status. As more screens appear in the lives of the poor, screens are disappearing from the lives of the rich. The NY Times argues that human contact is an elite luxury.

I would add that the privilege of unplugging is a new social inequality manifestation, one that goes beyond economic status, and more tied to education and digital awareness.
Another form of inequality related to digital awareness is that communities that are not well represented in the online world face two sets of problems: 1) they would tend to disappear from it (a combination of poor data and real estate speculations led Google to rename an entire neighborhood in the city of Buffalo, despite the residents’ income and will). 2) They would be cheap material for biased surveillance.
What is a clever and empowering way of disappearing then? One first needs to think about what she wants to disappear from. Big tech platforms and constant required availability are under scrutiny: their quality, the data farming business models, the meaningfulness of the interactions… A growing voice is pointing to a slow food approach to the web: the backlash of big tech since 2017 is creating new forms of ownership and sovereignty, so far quite artisanal, but growing. I’d guess that the Copyright Law just approved by the European Parliament (apparently some MEPs pressed the wrong button 🤦🏻‍♀️) is just another sign to build open and collectively owned alternatives (trying to be positive here). If Splinternet must be, then we better embrace it ahead and try to do something with it.
(Excerpt from Newsletter issue #18, March 2019)